Brazilian jiu-jitsu (BJJ) has come a long way since it was adopted from the traditional Japanese form, which was practiced solely in a gi. This lead to confusion among the Brazilian spectators they were used to seeing fighters sparring and taking part in competitions bare-chested.
Now that the sport has earned its place as a popular mixed martial art, BJJ without the gi (known as ‘no gi’) has rapidly become popular. 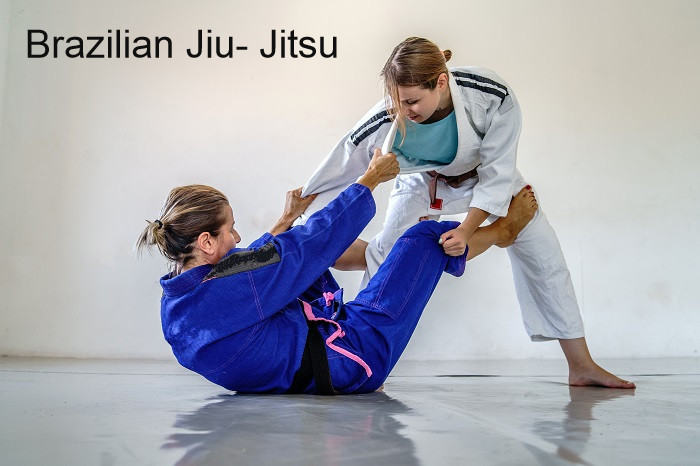 However, which is better – gi or no gi – is debatable. Shouldn’t an athlete know how to fight properly either way? The sport, after all, is about controlling your opponent, not their clothing.
In this post, we outline some of the primary differences to help you understand which style might suit you best.

Primary Differences Between Gi and ‘No Gi’ BJJ

Gi and no gi BJJ differs in various ways. Keep reading to discover what they are.

As mentioned, BJJ with gi requires practitioners to wear traditional attire. This consists of a heavy cotton jacket with a thick collar and reinforced hems, and a pair of drawstring pants made from the same material. This outfit is completed with a belt tied over the jacket and around the waist.
‘No gi’ attire consists of rash guards and broad shorts which are often paired with compression shorts. This is generally done to prevent both leg rashes and the fighter coming in contact with infections and bacteria from other players or the ring.

Along with the clothing, the techniques in each form differ, although certain ones can be used in both.
For instance, in gi training, grapplers make use of their opponent’s sleeves and collar to set up attacks and control their movement. The outfit allows the attacker to grab on to their opponent’s clothing and successfully perform collar chokes, sweeps and other movements. When fighting without the gi, gripping is only possible on the opponent’s wrists, neck, hips and elbows; this allows them to slip out of your grip easier. Remember, when grappling with no gi, your strength, speed and overall athleticism come into play.

There are plenty of opportunities for both styles of fighters in terms of competition. One of the biggest BJJ competition organizations, the International Brazilian Jiu Jitsu Federation (IBJJF), has brackets for both gi and no gi fighting.
However, certain organizations only allow events with gi. All competitions and organizations have different rules. This means you need to be prepared to adapt as those rules may vary depending on the tournament.

Typically, no gi matches are faster paced as your opponent won’t have anything besides your body to grab on to. This leaves you free to move from one position to another much faster as you won’t be slowed down because someone is holding on to you.
When your opponent can grab on to your gi, the match becomes slower. But this also means you can take time to change positions and set up attacks.

Gi vs. No Gi – Which One Should You Choose?

Still wondering whether to choose a gi? Your best bet is to practice both. Here’s why.

Training In a Gi

When training in a gi, you’re forced to be more aware of submissions and sweep positions. These fighters tend to build a good foundation in defence. This also lets you defend yourself better in real-life situations, especially if your opponent is wearing a sweatshirt or jacket.

Training Without a Gi

Fighters training without a gi, learn how to set up and execute smaller skill sets more effectively and easily. This is because no gi doesn’t offer many options. Since there are fewer sweeps and submissions possible, fighters training in this form tends to be better at offence. Often, no gi combatants win matches due to submissions, not by accumulating more points.
Although both gi and no gi BJJ seem similar, they play out differently. Since each type has its advantages, it’s safe to say that fighters can benefit from training in both. In the long run, this can make you a better grappler and help correct your weaknesses. Ultimately it comes down to understanding what works best for you.