Home » Blog » 4 Styles of Karate Training (And How They Differ)

Karate is a martial art first developed in Okinawa, Japan. It was introduced in a period when Okinawans were barred from owning weapons, leading them to learn how to defend themselves with their bodies. The term ‘karate’ means empty hand (‘kara’ – empty; ‘te’ – hand), and the practice has evolved greatly over the years. There are dozens of styles being taught at MMA and karate training classes around the world, and within those styles are many variations. 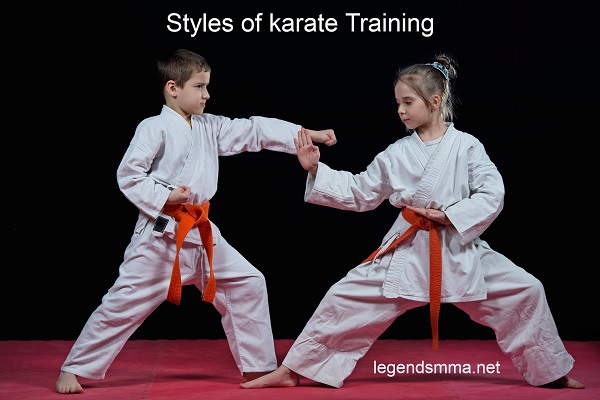 Let’s take a quick look at four karate styles and how they differ.

Karate is more than just a sport. It’s a way of life that involves teachings that explore both mentality and morality.

Keep reading to find out how karate allows students to become the best version of themselves.

It also incorporates breathing power along with a variety of stances offering both hard and soft techniques that clearly show the difference between the styles. In total there are 12 katas (or series) in this style, with most of them focused on using one’s hands in various ways to strike your opponent.

Shotokan-ryu is among the most well-known forms of karate. It was founded by Gichin Funakoshi in Tokyo in 1938. It employs linear methods along with wide stances to enable practitioners to deliver remarkable strikes in a quick, efficient manner. Students use their fingers, hands, elbows, feet and knees to land strikes on their opponents, primarily focusing on balance, breathing, form and speed. They also employ powerful strikes that are typically landed in a straight line to instantly stop an opponent or attacker.

This style was founded by Kanbun Uechi during the early 1900s in Okinawa and is influenced by ancient Chinese fighting forms. There are eight types of katas in this form of karate, which is a mix of open-handed strikes, kicks using the big toe, strikes with one knuckle and circular blocks. It typically follows the traditional styles of karate by encouraging its practitioners to be respectful towards their opponent and disciplined.

Founded by Hironori Otsuka, this form mixes the grappling used in jujutsu with the striking techniques of Shotokan. Otsuka was one of Gichin Funakoshi’s earliest students. He also studied under other masters before coming up with his own style prior to World War II.  Wado-Ryu, which is considered a more spiritual form of karate, focuses mainly on harmony and movement.

Rather than simply focusing on contact sparring, it educates practitioners on ways to move their bodies to dodge attacks. It’s one of the most fluid forms of karate and distinguishes itself from other styles with shorter stances.

There are many other styles of karate training you can choose from, with their core tenets remaining the same. While you may see slight differences, each relies on moral and mental fortitude. If you’re thinking of pursuing karate or MMA training, be sure to choose a style you enjoy practicing. Also, be sure to find a dojo that teaches you the proper techniques of whichever style you prefer.