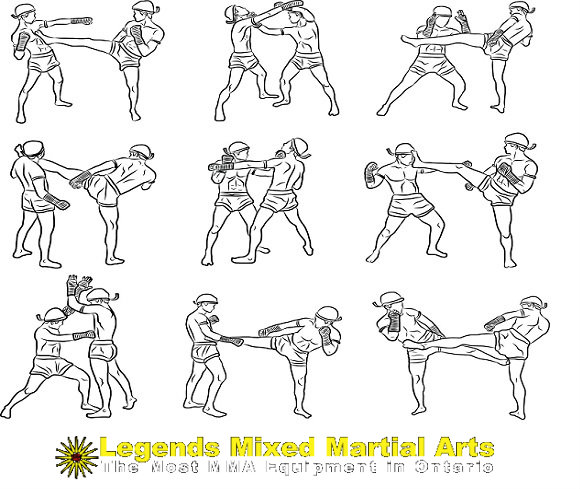 Muay Thai involves the use of your shins, elbows, and knees as weapons. Powerful kicks play a major role in your performance as good kickers are at an advantage. In today’s post, we’ll take a look at some of the types of kicks that you need to know as a Muay Thai fighter.

Also known as Teep Kick, this type of kick is basically a long range straight foot-thrust. A push kick is a powerful weapon to target the opponent’s solar plexus, hips, abs, and even the face. It helps to set up an attack and keeps the opponent at a distance. It’s a bold, fast, and disruptive move meant to dominate the opponent in the ring.

This Muay Thai kick is used to target almost all body parts of the opponent. Round kicks have the following variations:

It’s not a common type of Muay Thai kick but it’s a more impressive move than any standard round kick when performed right. It requires the fighter to jump while aiming to kick. The momentum and the power generated during the kick are very high which makes it one of the strongest Muay Thai techniques to use.

Muay Thai kicks are hard to learn. They require proper training and exhaustive practice to pull off in a fight. If you want to learn the kick techniques, enrol yourself in a reputed martial arts training facility that focuses on individual abilities and helps you discover your potential. Contact Legends Mixed Martial Arts in Brampton and try out any of our classes for free!

A diagonal kick uses the shin to target the upper thighs, back of the neck, arms, around the ears and lower part of the rib cage. It should ideally make a 45° angle against the floor to attain maximum efficiency and be performed by ensuring the instep of the back of the foot hits the target. Additionally, the body needs to be inclined towards the opposite direction of the kick. The leg is swung upward, and right before hitting the target, the foot needs to be twisted such that the arch faces down. This allows the fighter to hit the opponent effectively. Remember, the kick should be higher with the supporting leg, resulting in the body having more incline in the opposite direction.

This muay Thai training technique helps you counter your opponent’s attack or throw them off balance. Also known as teep trong, this straight foot jab is a long technique that is used similarly in boxing. This method stops your opponent from moving in on you, controls the distance between you and them, and is generally aimed at their mid-section.

This variation of the roundhouse requires practitioners to quickly switch their stance. For instance, if you are right-handed, your left leg will generally be in front. When you switch, your left leg will become your power leg, allowing you to be ready to attack your opponent’s right side. This kick misleads opponents with clever footwork and timing. It can also be used for a wide range of attacks, but remember not to jump on both legs when changing your stance. Alternatively, take a couple of quick steps. Remember to place the lead leg back and bring the back leg forward to remain grounded and maintain balance while moving quickly.

Low kicks target the body’s widest and longest nerve: the sciatic nerve which starts at the lower back and continues through the thighs and legs, ending at the feet. Attacking this nerve can destabilize your opponent, resulting in a loss of dexterity and decreased mobility. The fighter can repeatedly target the lower leg and thighs and damage their opponent’s muscles, bones, joints and ligaments. It’s effective in breaking the opponent’s will to fight and can stop attackers in their tracks.

To perform it effectively, you need to place your legs ahead of your body. Remember, the sciatic nerve is what you are aiming for, whether you go for the opponent’s outer or inner thigh, groin, lower abdomen or knees. Although most fighters tend to go for the inner or outer thigh, you need to quickly decide which part you will go for. Once you have, pivot your left leg and swing the right to land the kick. Your body must move in the same direction. Then use your momentum to disable your opponent. Never let your guard down and remember to always protect your body and head from counterattacks.