Muay Thai is a distinct martial art because, unlike other combat sports, it has so many variables to consider. It makes use of eight points of contact, including punches, kicks, knees, and elbows. That’s why it is called the ‘Art of 8 Limbs’.

Practising Muay Thai helps you get in shape and can boost your confidence, which can, in turn, lead to success in other areas of your life. If you are drawn to it for self-defence, Muay Thai is an extremely effective practice.

Do you want to learn how to master Muay Thai self-defence techniques to keep you safe in a tough situation? Here we explore some of the key practices that can up your self-defence game in a great way.

Boost Your Confidence with These Basic Muay Thai Self-Defence Techniques

Learning to defend yourself is always a good thing. What better way to learn self-defence than through martial arts? And when you join Legends MMA, you are instructed by some of the best martial arts trainers in Brampton.

When it comes to self-defence, Muay Thai is one of the most effective martial arts. From blocking to kicking to parrying punches, you can use its essential techniques to defend yourself in the ring and against impending threats outside it. Keep reading to learn some of the crucial moves and techniques to building a great defence. 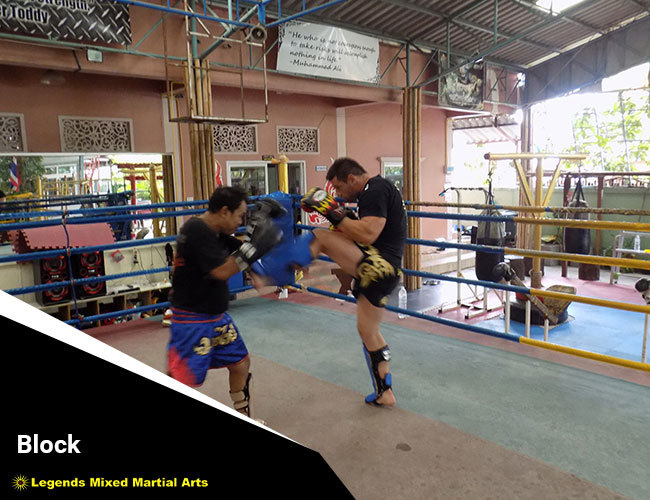 The best way to defend yourself against an opponent’s kicks is to block. But the type of block you use changes depending on your target.

Kicks to the body and head are generally blocked by bringing both arms to the side being hit. To block low kicks, the best defence is ‘checking’. Here, you bend your leg and bring it up to protect your thigh. This causes the kicker to slam their shin into the defending fighter’s shin or knee, causing pain and damage to the kicker. It is one of the most common and effective kicking blocks in all of Muay Thai.

There are many other blocking techniques you can learn, such as:

Parrying is one of the easier moves used as a defence against jabs and crosses. It is simple to learn and is most effective when used to block uppercuts and straight punches. For example, when you see a straight punch approaching, use a down parry to smack your opponent’s glove downwards. A light slap to the side of the glove will deflect the punch.

With good footwork and head movement, you can find an angle on your opponent and return with your own strikes. When a straight jab is coming, utilize your same side arm. For example, if they are throwing with their right hand, use your left hand.

Always try to make the smallest parry possible to avoid overreacting and leaving your face exposed. 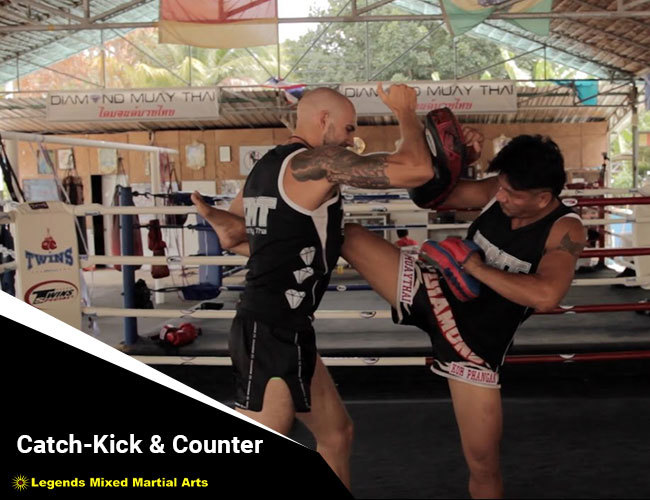 Checking kicks is a good defensive technique. But if you want to try an even more advanced technique while avoiding any kind of damage, try returning with a counter kick.

That’s where the catch-kick enters. It is an advanced way to deal with a kick thrown at the body. It includes movements like checking (blocking a kick with your leg with the upper part of your shin bone or knee), catching, and returning a strike to the opponent. It requires a good amount of awareness and timing on your part. Instead of wasting time, react quickly when you catch an opponent’s leg by striking or working on a sweep. This can throw your opponent off balance, making it harder for them to pull their leg away from you. You will see that your opponent will be less likely to continue throwing body kicks.

You can catch your opponent’s leg with a small forward stride and then deliver a knee attack. By doing so, you can reach close enough to them to grab their head and drive it down while performing the sweep. As you hold on to one of your opponent’s legs, having a firm grip on their head or neck offers you more control over their body.

These are three of the most essential Muay Thai techniques that you can use for your self-defence both in and out of the ring. Muay Thai, kickboxing, and karate are some of the great self-defence sports. And the better you get at their techniques, the better your overall defence will become. If you want to improve your Muay Thai defensive game, be sure to attend Legends MMA’s Muay Thai classes in Brampton to learn from world-class coaches.